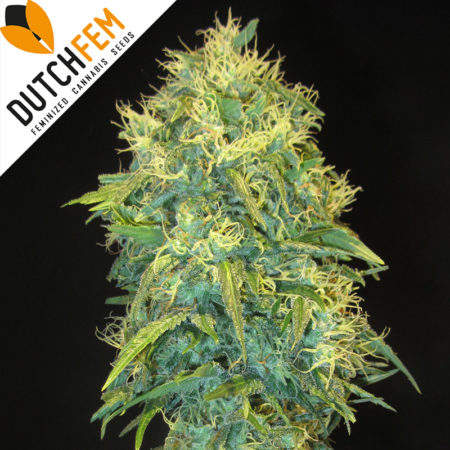 White Widow is one of the most famous strains worldwide, it has won multiple cups since the early ninenties and is available in every coffeeshop in the Netherlands. DuthcFem has crossed her with Tangerine Diesel which resulted in a high THC/CBD variety. Now you can get the best of both worlds; a heavy Indica strain combined with the tangie aroma of Tangerine Diesel: La Médica Blanca.

La Blanca, a member of the ‘White Family,’ is a popular cannabis strain across the world. It is a cross between the White Widow and the product of another cross between two cannabis strains – the Great White Shark and Snow White. It’s worth mentioning that La Medica Blanca has received several Cannabis Cups since the 1990s. It is also one of the most consumed strains of cannabis – both for recreation and medical purposes.

La Medica Blanca feminised seeds are highly resistant to mould and disease making them ideal for growing in both indoor and outdoor environments. The strain has a shorter flowering time compared to most cannabis strains – 8-9 weeks when growing indoors. When growing La Medica Blanca outdoors, expect to harvest it from September to October.

The best thing about this cannabis strain is that it reaches a manageable height – over a meter when grown outdoors and about 70 cm when grown indoors – but delivers fairly high yields. When grown indoors, you can expect to harvest up to 575 grams or 20.3 ounces per square metre. When grown outdoors, La Medica Blanca delivers about 650 grams or 22.9 ounces per plant. We even saw 1 La Medica Blanca grown in Italy that gave 1.2kg on 1 plant!  To get the best yields, it is recommended to use the Screen of Green (SCROG) technique.

La Medica Blanca is very easy to grow, can withstand extreme conditions and requires little maintenance. Growers should note that this cannabis strain is easily affected by nutrient burn. Therefore, be sure to apply small amounts of fertilizer.

La Medica Blanca has a THC content of 15% and an Indica/Sativa ratio of 6:4. These contents give the cannabis strain a strong relaxing effect making it an ideal option for both recreational and medical users. While its highness doesn’t last long, it offers a relaxing effect that lasts for several hours while maintaining a sense of mental awareness. Users can also experience an increase in appetite.

There are no reviews yet.

Be the first to review “La Medica Blanca” Cancel reply